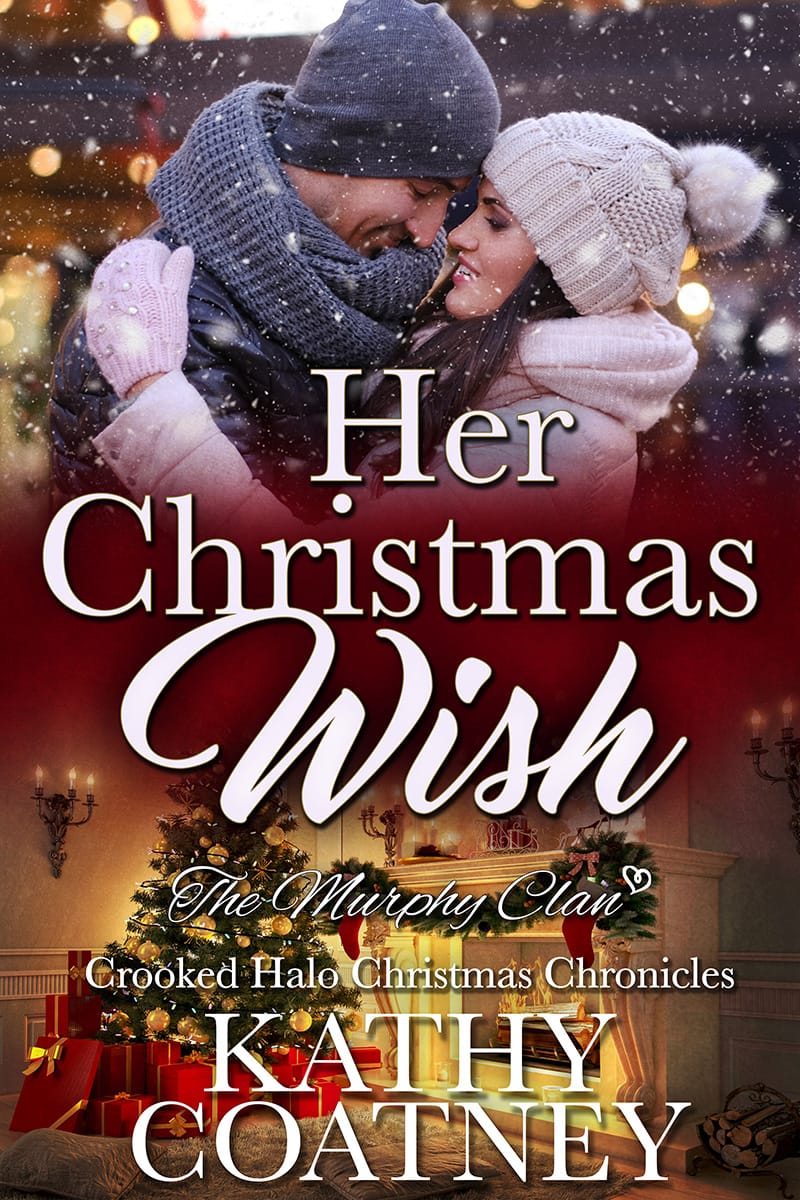 She lost her Christmas spirit. He’s determined to bring it back.

Bella Clark loves Hope’s Crossing, her tight-knit family, and the Christmas glitter and special warmth and cheer that can only be found in rural Indiana. When her husband left her two years ago on Christmas Eve, her joy for the holidays vanished like Santa up the chimney. Now, something as simple as hanging Christmas decorations is an impossible task.

Matt Baldwin loves baseball almost as much as breathing until he walks into The Wishing Stone, a jewelry store owned by Bella. He’s immediately smitten with the dark-eyed brunette. The more time they spend together, the more determined he becomes to prove to her he’s the man of her dreams and her Christmas wish. With a little help from their guardian angels, can Matt show Bella that Christmas without him is no Christmas at all?

Tag along with this heavenly duo & get Her Christmas Wish, the second of the Crooked Halo Chronicles Christmas stories! 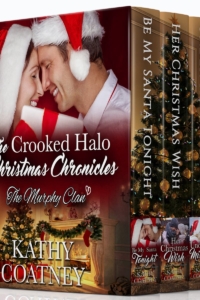 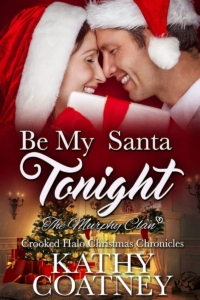 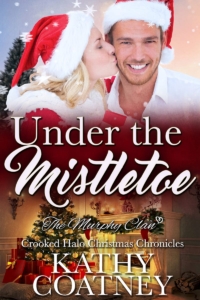 Aurora, head angel for the Lost Souls Division, stepped onto the glass elevator. The doors swooshed shut and the Seattle skyline glowed, snow drifting from the sky. She studied the marina, the buildings a pristine white from the snow. It could be a white Christmas in Seattle. A rare occurrence, but one that made the city truly magical.

She reached the bottom floor and the doors opened into Heaven Sent, a private detective agency run by three retired nuns.

Skirting around the main desk, Aurora passed a row of potted Christmas trees, strings of cranberries and popcorn weighing down the limbs, pine needles crunching under her boots as she entered the sitting room.

A fire crackled, warm and inviting, garland strung over the mantel. She sank down into the leather club chair next to the fire and waited for Sister Marie, one of the nuns who owned the agency and the only human who could see and talk to Aurora.

Precisely at four, Sister Marie breezed through the doorway with a pot of tea. With practiced ease, she set it on the side table and filled two cups. Pushing a cup and saucer toward Aurora, she perched on the seat across from her. “What’s troubling you, dear?”

Calm filled Aurora and lifted her mood. It was why she came here when she was out of sorts. “I thought I’d learned to hide my expressions, but you read me like a book, Sister.”

She patted Aurora’s hand as light, tinkling laughter echoed from her. “I read you so easily because I’ve known you so long. For those who don’t know you as well, you’ll keep them guessing.”

Good to know. She couldn’t have her angels on to her, especially Olivia and Zack.

Sister Marie arched a brow, clearly waiting for her to continue. Sometimes Aurora wondered if the nun suspected she was an angel.

Aurora blew out a breath, trying to decide where to begin. “My two charges are at it again.”

“Worse, completely ignoring each other.”

Aurora studied Sister Marie’s serene expression. She wished she could be as composed, but agitation churned within her. “It is, and I’ve tried everything to get them to communicate. Nothing works. Something happened after their last assignment.”

Sister Marie stared at the ceiling as if searching for divine intervention. “You’ve said unorthodox methods worked in the past.”

“Then perhaps it’s time to go back to what’s worked before.”

Another joint mission. It wouldn’t make her superiors happy since angels were supposed to work alone, but they’d tasked her with bringing Zack and Olivia together, and she would do whatever it took to complete her assignment.

Sister Marie stared out the window to the adjacent store, Man’s Best Friend, a doggie bakery, as a woman exited carrying a squirming puppy. “Sometimes rattling the cages makes the most sense.”

Aurora rose, her scuffed boots clunked against the gleaming wood floor as she leaned over and hugged Sister Marie, sprinkling stardust over her. “Thanks, Sister, you always say just the right thing.”

Aurora took the elevator back to angel headquarters. For humans the elevator only went to the fifteenth floor, but for angels it went to the heavens. As she stepped off the elevator, she mentally summoned her troubled angels, Zack Evans and Olivia Taylor, as she walked past the divisions for Postal Angels, Weather Angels, Lost Pet Angels, and Guardian Angels to the Lost Souls Division or as she liked to think of it, Angels R Us. She entered her apartment/office.

She loved her apartment. It reminded her of her life on earth even though it was in Seattle instead of San Francisco. She walked out to her balcony, and Puget Sound spread out before her, the snow turning everything white. Inhaling, the tang from the saltwater filled her nostrils and immediately relaxed her.

The psychedelic glass beads rattled, and Zack’s tension vibrated through her. Olivia arrived a moment later, adding another layer of anxiety. The two had definitely taken a detour in their relationship since they’d completed their last assignment.

Aurora remained on the patio, her eyes closed, emotions rolling over her like the turbulent waters of the Sound below.

Neither angel spoke and the stilted silence became oppressive.

Aurora turned to find them both staring at her.

She crossed over to her living room, dropped down into the lotus position, and motioned for them to join her. They reluctantly followed her directive. Aurora began humming Lucy in the Sky with Diamonds to summon the northern lights. Not only was she head angel of the Lost Souls Division, but with her death she’d become the Aurora Borealis, capable of transforming dark skies into glowing emerald light.

Finally, she opened her eyes and stared directly at them. “I suppose you’re wondering why I asked you here?”

They each gave her a slight nod.

“I have a new assignment for you.”

“Yes.” Aurora’s gaze moved between them, gauging their reactions. “Is that a problem?”

Olivia straightened in her chair, her body tense. “What is the point of having us continually work together?”

“Is there a reason I shouldn’t pair you two together?” Aurora countered. “You did an excellent job in Conspiracy with Holly and Liam, who by the way, are expecting their first baby right after Christmas—less than four weeks away. I believe you will handle this assignment equally well.” She zeroed in on Zack. “I think you could really connect with Matt Baldwin since you played minor league baseball before you joined the CIA. The man has a good life, but he’s missing one thing—love.”

The light in Zack’s eyes told her she’d snared his interest. “Okay, I’m in.”

Aurora waited for Olivia’s agreement. Not that she had a choice in the matter, but Aurora preferred Olivia come to that conclusion on her own. When she gave a slight nod, Aurora clapped her hands together. “Excellent.”

She gave them the details on Operation Matt-and-Bella-Christmas-Miracle, then stood. “My ride is waiting so time for you two to get to work. Oh, and the same as your last assignment, stay close to your lost souls, monitor their emotions, and bring a Christmas miracle to Hope’s Crossing.”

Her gaze darted to the ’67 Shelby Mustang idling at her balcony. She winked at the blond-haired, blue-eyed King of Cool leaning an elbow on the open car window. Aurora’s heart accelerated with some very unangelic thoughts of an afternoon with the sexiest movie star to ever hit the big screen.

She cast a glance at her angels hoping they could pull off their assignment. When they didn’t move, she shooed them out of her apartment, then slid into the Mustang. The engine revved, and they flew off, sending stars crashing to earth.