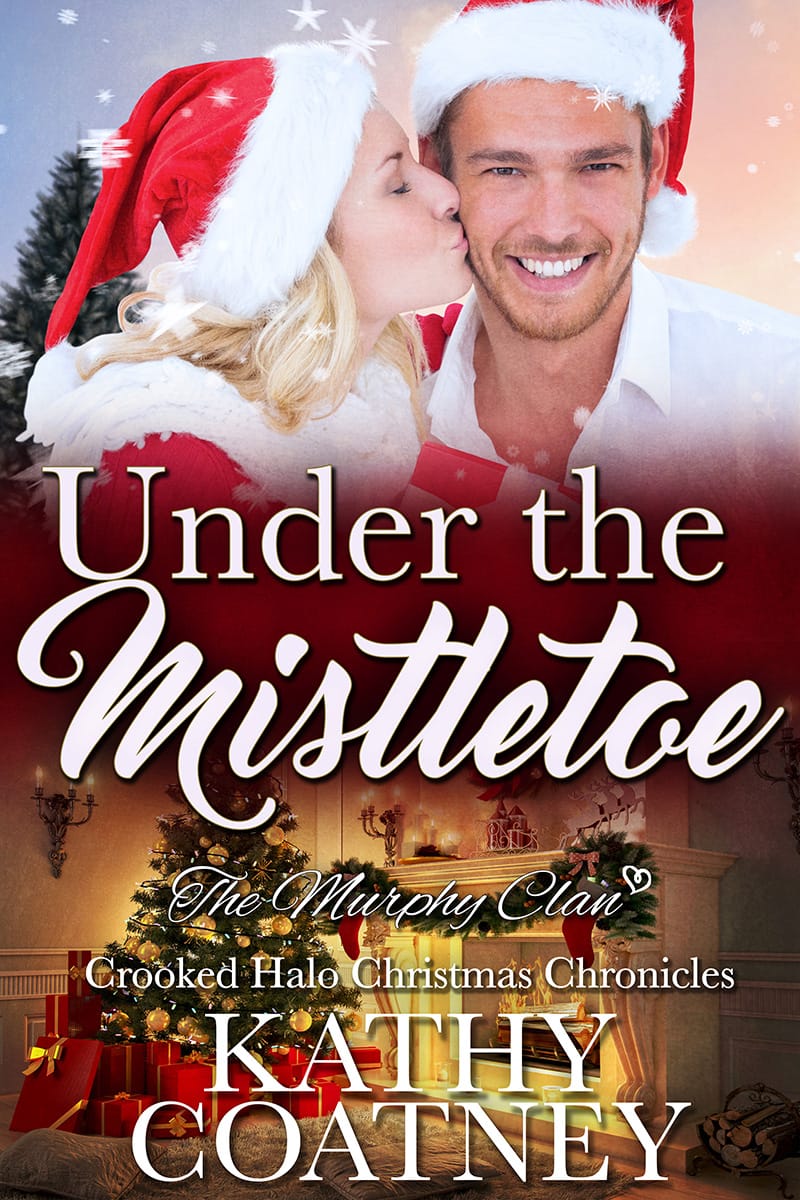 She’s looking for more than a holiday romance. He’s leaving town after Christmas.

Frankie Murphy is done with holiday romances after her last one crashed and burned. She wants a guy who’s looking for more than fun and games.

Seth McKenzie is back in town. He’s always been a rolling stone, never letting the grass grow under his feet. But the instant he sees Frankie, he’s got her on the brain and no other woman will do.

With a little help from their guardian angels, the two share a passionate kiss under the mistletoe. Will Seth discover that loving Frankie is the happily-ever-after he didn’t know he was looking for?

Tag along with this heavenly duo & get Under the Mistletoe, Chronicle three of three Crooked Halo Chronicles Christmas stories!

Aurora, the head angel for the Lost Souls Division, tossed her heavy black ponytail over her shoulder and tugged her tie-dyed Woodstock T-shirt into place. She was about to step into the glass elevator and go down to Heaven Sent, a private detective agency run by three retired nuns, when her superior Lydia, former head angel of the Lost Pet Division summoned her.

Stepping back, she took the long hallway past the divisions for Postal Angels, Weather Angels, Guardian Angels, and Lost Pet Angels.

Aurora knocked then entered Lydia’s apartment. A pair of tiger-striped kittens, bells tied to their collars, perched on the back of Rudolf, a huge Great Dane wearing felt antlers. They batted at Christmas ornaments hanging from a massive pine tree. The canine tolerated their antics with a bored yawn, then flopped its head onto its paws and fell asleep. A pair of white cottontails hopped over and nestled under his chin.

As Aurora weaved through the menagerie of critters, Ebenezer, the ancient parakeet sang non-stop Christmas carols from his perch that set Olaf, the old hound dog to howling.

Finally, she reached the kitchen to find Lydia at the table with a puppy on her lap bandaging its ankle.

“Aurora, perfect timing.” She held out the squirming bundle. “Hold her while I finish wrapping her foot.”

Cuddling the puppy to her chest, she watched as Lydia expertly wrapped the festive bandage around its paw, then tied it off. She produced a biscuit from her pocket, stroking the pup as she offered it to her. “Good girl, Noelle.”

Lydia loved Christmas almost as much as her animals and gave most of them some kind of holiday name.

Noelle squirmed and Aurora set her down, watching her race into the next room to bark at Ebenezer.

Lydia closed the kitchen door, muting some of the racket, then sat across from Aurora. Never one to rush, she crossed a jean-clad leg over the other, absently brushing dog hair from her T-shirt. Finally, she faced Aurora. “I imagine you’re wondering why you’re here.”

“First, I want to tell you what a fine job you’ve done with Zack and Olivia. As you’re aware, we try to avoid pairing angels together for assignments, but it’s clearly working in your department.”

Lydia paused, staring out the window to the snow-covered ground below where a herd of elk gathered, the scene mimicking her home on earth. The view from Aurora’s balcony was San Francisco, but Lydia’s was the Colorado Rocky Mountains, and the ranch she’d lived on before her death.

An elk snorted, sending out a frosted breath.

“Your angels did an excellent job bringing Matt and Bella Baldwin together in Hope’s Crossing. We were so pleased, in fact, we have another couple in need of intervention. Seth McKenzie and Frankie Murphy. Seth’s a notorious flirt, has a reckless streak, but a good heart which comes from his adoptive parents. They gave him and the other two boys they adopted love and security for the first time in their lives.

“Seth’s currently back in Paradise Falls taking care of his father, and Frankie has caught his eye, but she won’t give him the time of day. She’s looking for a man with staying power, but Seth has restless feet. He just needs to find the right woman.” She handed Aurora a pair of hefty files. “I want you to send Zack and Olivia to help them see they’re meant for each other.”

That was no problem, but it really didn’t necessitate calling her in for a face-to-face meeting. “This looks like a standard assignment, so why am I here?”

“I wanted an update on Zack and Olivia.”

“We discussed this after their last assignment, and I thought they were back on track.”

“So did I. They were happy and moving forward, then Zack pulled back.”

Lydia quirked a brow. “Zack. That’s out of character for him, isn’t it?”

“It is. I haven’t been able to figure out what went wrong.”

“Keep me posted. I want these two together.”

It was Aurora’s turn to be shocked. “I thought that was frowned on?”

“Oh, it is, but I’ve been working to change that, and if you can successfully get these two angels together it could open the door for other matches.”

Aurora smiled. “You’re a romantic at heart, aren’t you?”

Lydia gestured to the room full of animals. “I don’t think it would surprise anyone to hear I have a soft heart, do you?”

A crash sounded from the next room, and Ebenezer screeched, his Christmas carol interrupted mid-verse. Lydia sighed and pushed to her feet. “It’s like having a houseful of children.”

She followed Lydia back through the apartment, pausing to rub Olaf’s ears as she mentally summoned Zack and Olivia.

Minutes later, she entered her apartment that also served as what she jokingly called Angels R Us. She crossed to her living room and dropped down into the lotus position. Humming Lucy in the Sky with Diamonds, she summoned the northern lights. Not only was she head angel of the Lost Souls Division, but with her death she’d become the Aurora Borealis capable of transforming dark skies into glowing emerald light.

She sensed Zack and Olivia’s presence as she concluded the light show. Slowly opening her eyes, she stared directly at them. “I suppose you’re wondering why I asked you here?”

“I have a new assignment for you.”

Aurora didn’t miss the stiffening in his demeanor. That was a new twist. It was usually Olivia who resisted a joint assignment.

“Where to this time?” Olivia asked.

“Where exactly is that?”

Aurora knew she preferred the city, but that wouldn’t be happening this time. “It’s a small town,” she confirmed.

“Why can’t we ever get an assignment in a city where there’s actually something going on?” Olivia’s lips firmed in resistance, then realizing she had no choice, she accepted her fate.

Aurora focused on Zack who’d been unusually silent during their exchange. The man always had a comment or two—or three. Something was definitely eating at him. She’d have to dig deeper and find out what was troubling him.

Handing them the files on Seth and Frankie, she said, “Frankie’s looking for more than a holiday romance, but Seth’s a rambling man at heart. With the right encouragement he’ll put down roots.” Aurora gestured to the files. “It’s your job to bring them together by Christmas.”

A pink Cadillac pulled up to her balcony. The blue-eyed king of rock and roll winked at Aurora. She smiled and blew him a kiss before turning back to her angels.

“Seth and Frankie need you to help them discover their happiness is tied to each other.” She nudged Zack and Olivia onto the balcony, then she slid into the Cadillac.

“Good luck,” she called back to them, waving. Her voice sing-songed over them as she flew off. “Elvis has left the building.”

Copyright© 2023 Kathy Coatney.
Back to Top